When Walt Disney was building his Disneyland empire in California in 1955, there was a growing fascination with all things Disney in post-war Europe, and particularly in Italy. Topolino, or Mickey Mouse, hit it big in Italy. By the 1960’s, a lively series of  paperback bound comics  emerged and were extremely popular.  The comics paralleled a fascination with American culture that was taking hold. Today, tees and sweatshirts and all manner of clothing are festooned with Topolino imagery, and a good number of grown men and women don this attire enthusiastically.  In Italy, Disney is not just for kids.

I have a large collection of  the Italian Disney comics, and I never fail to return from Italy without at least 3 or 4 new issues.  I am addicted. I learned a lot of my Italian and a multitude of colorful idioms from these illustrated books. And it turns out that many Italians learned a lot about “American” cooking from their Disney-Italian comic book characters.  You can thank Donald Duck and his extended family.

A favorite series featured the adventurous tales of  Uncle Scrooge McDuck (Paperone) along with nephew Donald (Papernik) his three nephews (Qui, Quo, and Qua) and Grandmother Elvira known as Nonna Papera (Grandma Duck).  A rather distorted image of American family life was presented in these comics.  Picnics in the park, gold mining in the Rockies, cowboys wrangling cattle in the west, river rafting down the Mississippi, and trips to outer space were family adventure stories in the comics, all bankrolled by Unca Scrooge himself and in pursuit of some thief who was stealing his treasure chest. 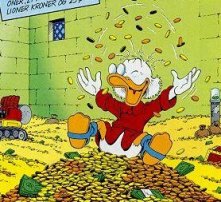 Thank goodness for Nonna Papera.  She kept the boys well-fed, the American way. The Italian comic book artists delighted in depicting her beautiful apple pies cooling on her window sill, and even several adventures involved mysteries around who swiped the cooling pastry. Italians  became fascinated with Nona Papera’s beautifully fluted pies–  and her cookies, sandwiches, and picnic fare, too.

According to Barks’ and Rosa’s Who’s Who In Duckburg, “Grandma Duck is in many ways the head of the Duck-family. She is normally the one who arranges the family’s Christmas celebrations and she’s known as an excellent cook with pies as one of many specialities.”  It was Donald’s grandmother who made American pie popular in Italy. 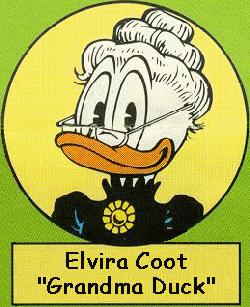 By 1970, a book of her recipes was published under the title Il Manuale di Nonna Papera (The Cookbook of Grandma Duck).  Many  Italian cooks will tell you today that this collection of recipes was their first cookbook and first venture into cooking.   Most of the recipes are an Italian interpretation of American dishes, but in reality, the recipes remain Italian in spirit. Sandwiches (or panini), a Chip and Dale Popcorn recipe, and lots of cakes and pies are included and are featured alongside traditional Italian sweets, finger foods, and several main dishes. Cleverly named, many recipe titles indicate that these are historical recipes handed down to Nonna Papera from very famous people of the past such as Queen Elizabeth or Christopher Columbus (appropriate personages for the settlement of America).

I’m still reading Disney comic books.  I have recently acquired a reprint of Nonna’s recipe book and have yet to try out these “American” recipes. I am sure if I do, I will no doubt improve not only speaking in Italian but also cooking in Italian.  In time, I might even receive that fine compliment about my cooking from an Italian:  “Pareva la torta di Nonna Papera.” (“That looks just like a cake made by Grandma Duck!”)      –MELorden

NOTE:  Click on the sidebar menu under Recipes for more cooking with Disney!

For a look at what the current world of Disney is offering in Mickey Mouse and Disney Princess cookbooks, check out these souvenir collections on Amazon: 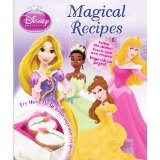 2 thoughts on “Cooking From Comics: In the Kitchen with Disney Characters”