HAPPY DAYS AND HAPPY HOMEMAKERS:  FOOD OF THE FIFTIES

What? The boss is coming home for dinner?  What’s a happy homemaker to do?

No problem.  With her ideal kitchen now a reality, the housewife of the era could automatically get a fine meal on the table. Any decent suburban kitchen of the 1950′s was stocked to the gills with canned goods, frozen vegetables, boxed magic meal helpers,  fabulous cakes mixes, and instant puddings. Post- war appliances were affordable and stylish, and  consumers were on the march.

Even with her hair still in curlers and the arrival of her husband and boss only a train ride away, the missus could not fail to whip up, on short notice, a quality home cooked meal. And to do so might contribute positively to the success of her husband’s future career.

Her kitchen was a masterpiece of  both modern efficiency and science as well as her haven and jewel. With the modern kitchen the center of her family life and femininity, the wife and homemaker of the 1950′s aspired to be the hostess with the most-est.

The classic 1950′s kitchen was a housewife’s dream.  If stocked appropriately with the correct inventory and equipment, it became her domestic laboratory.  Correct tools, abundant and available prepared foodstuffs, and a practical outline of directions and cooking procedures meant that all women could feed their family, and be adored for it.  ”If you can read, you can cook,” was the saying. Cooking was first and foremost a practice, not a fine art. Add in a stylish apron, a string of pearls, a few copies of Good Housekeeping, and the Betty Crocker Cook Book, and the good wife and mother served up family happiness on a plate.

Anybody could make a perfect cake.  Take Betty Crocker’s word for it. She ( a totally fictional character and invention of the advertising world) guaranteed a perfect cake every time you baked.

There was a lot of magic that could come out of that well-supplied workspace.  With a simple wave of her wand, the food fairy of the fifties nourished and delighted her family.  This was her special territory in the household; it was the hearth and heart of the home in the most pleasurable of ways, and she ruled the roost. 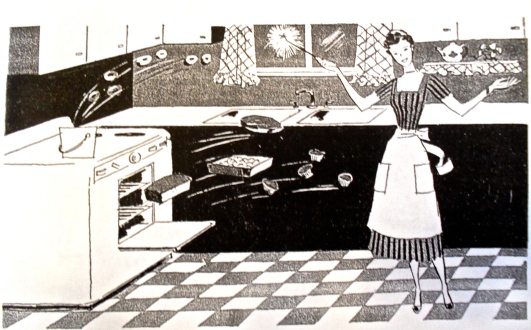 In the top illustration, a  handsome husband steals his wife’s hot cinnamon buns as she catches him. Demurely bending over the oven door,  she assumes a submissive posture. The image is  rather subliminal and suggests a sexy secret is present between the couple over those soft, yeasty, and fragrant goodies that he desires.

In the bottom illustration, the women and children in the family are all happily engaged in kitchen activities. They, and the tea kettle, whistle a happy tune while they work in the warm kitchen setting.  Look carefully to the upper left, and you will see father trying to sneak a peek.  Both illustrations suggest that husbands are guests in their wives’  kitchens. Here men are best kept at a distance from the place where all the magic happens and the secrets of good cooking are kept.

If a woman wanted to please her husband, said the advertisers of the day, it was through his stomach. As the primary shopper for food in her stay-at-home role, the budget-wise homemaker took this notion to heart.  The role of  homemaker and the keeping of the kitchen were serious business in the 1950′s.  But, oh so much easier than it was for her poor grandmother.

Canned and packaged and frozen goods took on a renewed enthusiasm after the war.  Peace and prosperity reigned and veiled the atomic threat, but the atomic age also created a strange sense of security for Americans in the 1950′s. In the spirit of “better living through chemistry” (a version of the DuPont corporation slogan), the food industry flourished.  The 50′s saw the arrival of Betty Crocker and Duncan Hines cake mixes, frozen pot pies and TV dinners, and the important science of home economics. Homemakers were moms and wives, but they were savvy, too.  (For a hilarious look back at a strange and hellacious series of 1950′s food photographs, check out this site featuring typical food styling from the period. Prepare yourself for banana and fern green tinted images and cutlets topped with pineapple rings and red maraschino cherry adornment at the Gallery of Regrettable Food.)

No longer were the days of rationing sugar, eggs, and flour forcing Americans to sacrifice personal conveniences for the military.  Cars and appliances were in demand.  Other raw materials, metals and synthetics, were available for consumers to use.  Marriage and birth rates skyrocketed as did housing as a result.  The family unit in suburbia was the target of industry and advertising, and much of the market was the homemaker and her hungry family.

Silk stockings were no longer rationed and the 100% silk material called chiffon became all the rage.  The length of dresses fell, too.  Soon chiffon cakes and pies became very popular.  A chiffon cake was a fluffy cake that got its poof from stiffly beaten egg whites combined with vegetable oil, flour, baking powder, eggs, and sugar. A version of a one crust refrigerator pie , chiffon pies were made of beaten egg whites and gelatins.  Flavorings for chiffon cakes and pies were often fruits such as strawberry, lemon, or orange, and chocolate was a favorite, too.    For 1950′s confections, taste in fashion informed taste in food.

Men, too, had a special role when it came to cooking in the form of the charcoal grill.   Without a fire pit of some sort, the suburban backyard seemed incomplete.  The man of the house could go primal over a smoking grill while discussing the latest anti-communist beliefs and enjoying a few beers.  Burgers, hot, dogs, corn on the cob, and kebabs were all the rage, thanks to the booming agra-business of the day.  Perhaps it was the post-war return from the Pacific islands where  the boys had enjoyed pig roasts and tropical fruits that inspired both the grilling mania and the cocktail party with Tiki drinks sporting little umbrellas. At any rate,  a man who could cook over a raging fire might just help his family survive an atomic apocalypse. The bar-b-que was one of  those 50′s fads that lasted and only got better over time. BBQ and the fine art of grilling has never been more popular in American society than today.

Today we also celebrate another larger-than-life food style of the era in contemporary and nostalgic re-interpretations of the comfort food dishes found in the highway diner– burgers, fries, mile-high pies, chile, mac and cheese, and meatloaf with mashed spuds.  It was the growing automobile culture and imminent interstate highway system which spawned all manner of road food and drive-ins.  Rock and rollers in their souped up jalopies enjoyed sock hops under the lights of the local shake shacks. Most of these drive-in dishes remain distinctly American and have never waned in popularity.  But mom’s broiled Spam kebabs with pineapple, green peppers, sweet soy and honey sauce, and maraschino cherries have pretty much gone the way of the dining dinosaur, and all those casseroles made with cans of cream of this-and-that Campbell’s Soup may only occasionally surface at church suppers.

Convenience foods and deconstructed and reconstituted packaged meals are still,  unfortunately, de rigueur in areas of the modern diet.The 1950′s are hardly a faded memory when it comes to the major transformations that took place in the production and sale of food since the end of World War II. We are still feeling their effects in our health and diet.  What has changed  most significantly, however, are the expectations for the Happy Homemaker and her role in the kitchen.

In the life of the mid-century American housewife,  whenever the boss came home for dinner unexpectedly, the smart homemaker of the day was expected to design, plan, and execute an impressive dinner. Push a button here, turn a knob there,  or open a package and follow directions. She had only to then set the table, put on some lipstick, ice the glasses–  and remember to take the curlers out of her hair before the guest of honor arrived.        –MELorden